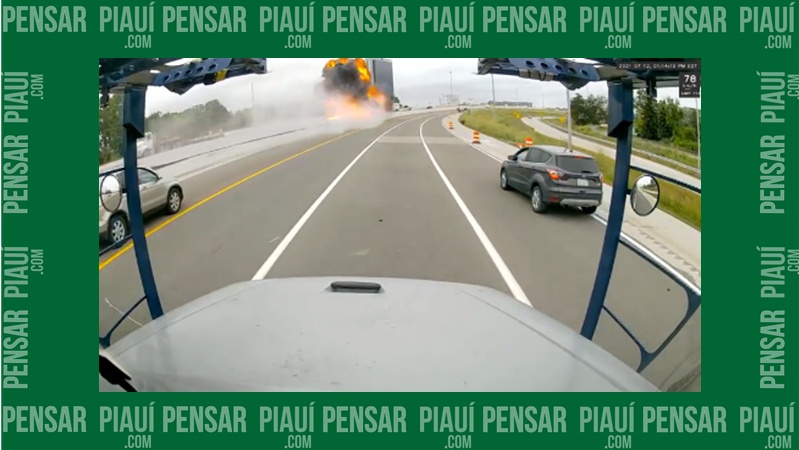 TROY, MI – Troy Fire Department Troy Mich. & Police are investigating a fuel tanker fire that happened at approximately 1:15 p.m. this afternoon, 07/12/2021 along I-75. Troy Case # 2021-18744 At 1:15 pm, Troy Police & Fire Dispatch was advised of a tanker truck that struck the center median wall of northbound I-75 near the Big Beaver Road overpass. The tanker truck immediately caught fire after striking the concrete barrier. The driver of the tanker truck, a 46-year-old male from Saint Clair, MI was able to escape the truck cab. Alliance EMS and Troy Police arrived on the scene to render aid and investigate. The truck driver was transported to Detroit Medical Center with minor injuries. No other vehicles were involved in the traffic crash. No other injuries were reported. Troy Police closed down northbound I-75 at Rochester Rd and southbound I-75 at Crooks. Three stations from Troy Fire Dept responded to the scene. Troy firefighters deployed hand lines to contain the fire and used Class B foam to completely extinguish it. Oakland County HazMat Team also responded to assist. The tanker truck was on fire for over two hours and Troy Fire crews remained on scene for several more hours for cleanup. 14,000 gallons of gasoline and diesel fuel were on board the tanker at the time of the traffic crash. Both northbound and southbound I-75 will remain closed for some time as Michigan Department of Transportation (MDOT) engineers investigate the fire damage along the freeway concrete. Michigan Department of Transportation has since closed southbound I-75 at Square Lake Road. Investigation into the cause of the crash is ongoing. Witnesses are requested to contact the Troy Police Department Traffic Safety Unit at 248-524-3477.